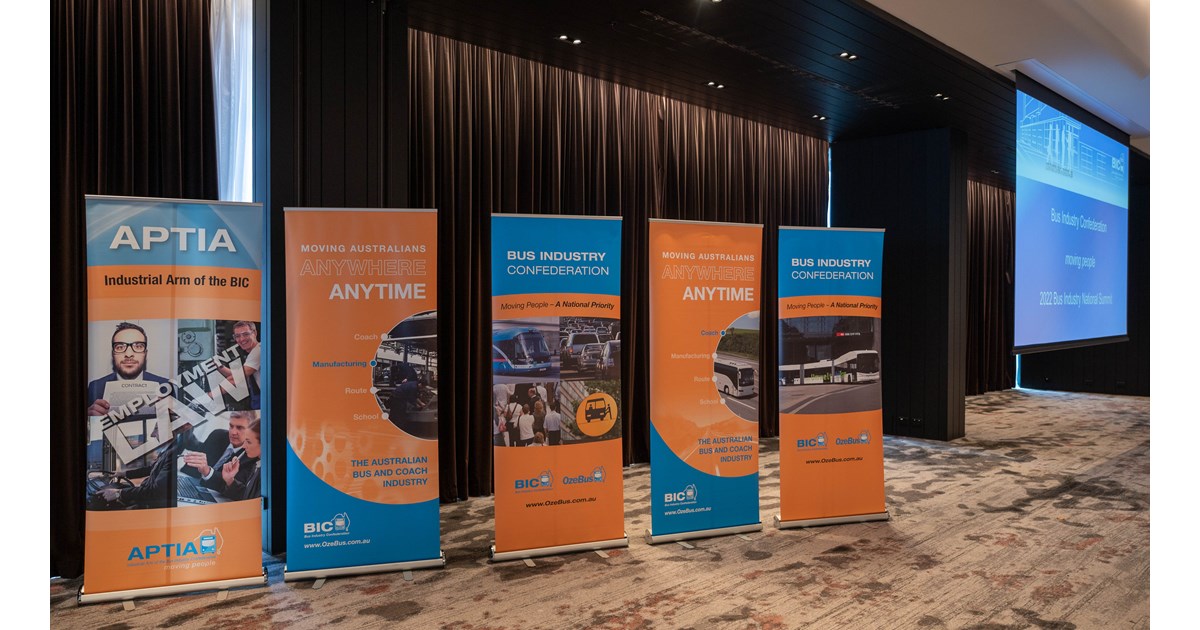 After years of disruption that prevented the Bus Industry Confederation from hosting its national summit, the Australian bus industry finally came together at the end of June to discuss the issues facing the sector.


Originally the Confederation of the Bus Industry (BIC) second The National Summit was to be held this past February. But after COVID-related issues delayed the event, the bus industry finally reconvened in June and made up for lost time. As the 2020 and 2021 editions of the Summit also did not take place, the bus industry was ready to discuss.

More than 260 delegates from thereading bus and coach companies across Australiaas good asrepresentatives of federalstate and territorial government departments met at the Realm hotel in Canberra in the parliamentary Triangle discuss the latest industry developments.

The National Mountain peakprovided opportunities for government, operators, bodybuilders and manufacturers to mix together with industry experts and researchers in an open forum setting. Senator and Minister for Trade and Tourism, Don Farrell, opened the proceedings on the first morning with a political vision for the future of the Australian bus industry..

He was followed by President BIC Tony Hopkins who presented the main topics of the two-day summit. Hopkins set the tone early by saying an the industry has developed a zero emission bus (ZEB) advice on standards and specifications in development to counter a lack of policy and regulations frame by governments. Advice is essential for industry when it comes to in transition without issue to ZEBs.

“Industry should not be responsible for self-regulating standards and specifications“, says Hopkins.“The government is lagging even though we are in transition.“

From there, the bus industry meeting quickly turned to others problems. Madonna Woodhead, BIC National Policy Manager discussed the challenges facing the sector with additional reforms at the Dinability Sstandards TO DO more accessible public transport. Woodhead was followed by N / AExecutive Director of the National Transport Commission (NTC) for regulatory reform Aaron de Rozario who summed it up changes was made for National heavy vehicle Right (NHVL) since The last national of the BIC conference organized at the end of 2019. De Rozario also outlined other proposed reforms to the NHVL.

RELATED ARTICLE: Managing Recruitment and Retention in the Bus and Coach Industry

Stephane Lucas then led the Summit on the main environmental theme of BIC’s “no bullshit” approach in the race to zero emissions in the bus industry. The Chairman of the BIC Zero Emission Bus Committee, and Managing Director of Warrnambool Bus Lines,said industry was forced todetermine the standards single-handedly without government assistance, reiterating Hopkins’ message that the bus industry Ipaves the way for the transition to zero emissions.

But instead of just discussing the frameworks and ideologies behind the transition to ZEBs, BIC hosted business panels to discuss the benefits of various technologies. In a bus industry sign futuristic perspective on sustainable technology, such as Viva Energyemerald trainers and Red Bus Services discussed examples of recent hydrogen fuel cell technology trials. Provide balance between hydrogen fuel cell and electric battery technology, JET Charge, Electromotive and TransitSystems everything mentioned the benefits of using electric technology to power bus fleets.

The top was filled with constant comparisons between the two leading technologies, Transit Systems, Transport for New South Wales and Transport Canberra all spoke of their experiences with this sustainable product line Powerful.

Discussions of potential technology completed on day one. Researcher at Deakin University Loren Tuck and ANU Bjorn, battery storage researcher Stürmberg gave a glimpse of the future of electric and hydrogen fuel cell technology in storage and infrastructureproviding members of the industry with an overview of the technology in development.

After the many presentations made on ZEB transitions the first day, the second day of the summit reviewed other pressings Questions in the bus and coach sector. The national technical summit heard from a range of BIC members and the CEO of the national heavy-duty vehicle regulator Sal petrocitto on changes to heavy vehicle legislation and fleet improvements since 2017. Panels made up of representatives Australia Energy, Mercedes-Benz buses and coaches and Volgren Australia continued to sift through the complex challenges facing the technical realities of a zero-emissions industry, while Australian Design Rules (ADR) compliance also became a hot topic in the afternoon.

Whereas this discussion on vehicle standards and safety continued technical presentations, national IR seminar scrutinized shortage of skilled labor retard the growth of many operators and manufacturers. Human relationship managers reiterated new ways to recruit and retain staff, while BIC’s national IR manager, Ian MacDonald, moderated a panel on the current state of precarious employment in the industry. At the end of the fast-paced two-day summit, many members of the bus industry were Present with a new world of informationswirling mainly around the ever-increasing challenges of the sector’s transition to ZEBs.

Under the new federal government, BIC President Hopkins is confident that these reforms can take place.

“We have a new Australian Labor government that is pro-public transport,” Hopkins said.Anthony Albanese has always been a good friend of BIC, and it’s good to have a prime minister who listens to our public transport needs.

“It’s an exciting time for us and the industry to work with New Prime Minister and the government to prioritize our immediate needs. »