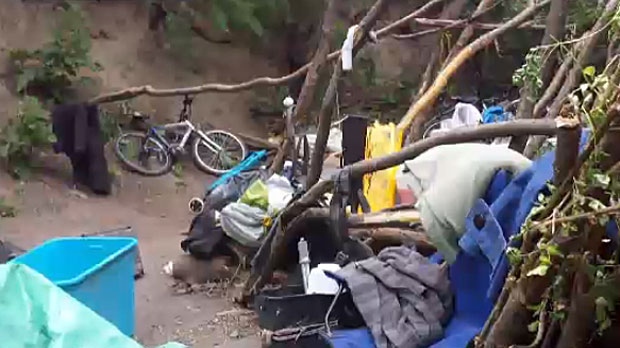 The Calgary City Government will provide $ 750,000 in one-time funding to the Calgary Homeless Foundation to increase access to emergency shelters this winter, which could include warming shelter spaces.

The unanimous decision was adopted by the community development committee on Wednesday afternoon.

Many presenters from nearby communities have expressed concern over an uncertain increase in the number of rough sleepers on the streets of Calgary.

“We’re already starting to see amputations and the weather has started to go down,” said Chaz Smith, president of Be the Change YYC Street Outreach, who has experienced homelessness himself.

He presented in council chambers suggesting that the city should create warming centers at CTrain stations, city buses and heated underground parking lots.

Smith added that not all people who sleep outside can access an overnight shelter for a number of reasons, which can include: security risks, pet bans and gender-separated dorms. that force couples to separate.

He added that vulnerable people need to be able to warm themselves outside overnight shelters, as winter poses an increased risk.

“Thirty-seven percent of all hospital discharges from frostbite are homeless people and 50 percent of the time they receive amputations, representing a large amount of precious human life that is negatively affected,” Smith said.

Smith’s organization is not a direct recipient of the city’s funding, as it is the Calgary Homeless Foundation that will be working with stakeholders in the coming days to determine winter protection measures for the homeless. . This may include warm-up solutions or expanded access to short stays at existing shelters and outreach groups.

The reception center provides compassionate access to non-clients when the temperature reaches -10, “unless that person poses an extreme risk to the safety of other clients or staff,” read a statement sent by email by General Manager Sandra Clarkson.

He went on to say that â€œSafety is a priority at DI, and we continually review our processes internally to ensure that we have as few barriers as possible to accessing a shelter. We look forward to working with the Calgary Homeless Foundation and other community partners. , including advocacy groups, to create safe spaces for all who need them during the winter months and work towards longer term solutions as a community. “

“MEET THE PEOPLE WHERE THEY ARE”

Ward 7 Councilor Terry Wong says helping to keep vulnerable people warm is not only an issue for the downtown area, but he wants to see support offered to meet people where they are.

“We have to go out and reach out and reach out and say, hey, there are shuttle services that are available, whether they are offered by the DOAP (Downtown Outreach Addictions Partnership) team and I hope Calgary Transit can provide some shelter buses that will pick them up, and then are able to get them to the right facility for the right type of needs they have, â€he said

Beyond funding for a winter season, several advisers also pointed out that there was still work to be done to address the chronic problem of homelessness.

â€œIt’s a start to addressing the challenges facing homeless Calgarians, but it’s by no means a radical change in how and where we deliver warming centers. I sincerely hope that we will continue to explore opportunities outside of the traditional housing system, â€Ward 11 Councilor Kourtney Penner said.

The Calgary mayor’s office says it realizes the issue of warming centers, shelter spaces and affordable housing are high on the agenda in the coming weeks.

With files from Mark Villani

When it comes to buses, will hydrogen or electricity win?