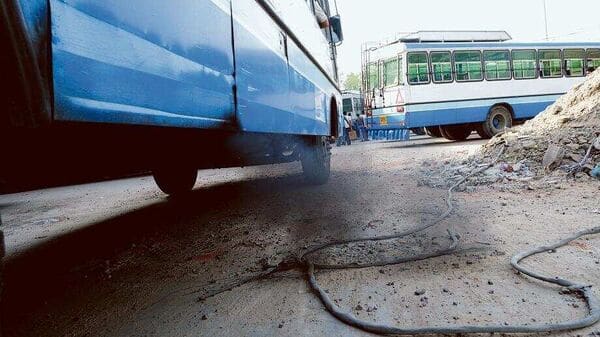 The central government has asked states to replace thousands of aging diesel public buses with electric ones, but state transport units say their finances have collapsed because passenger numbers have fallen after the pandemic.

The Ministry of Road Transport and Highways (MoRTH) has instructed State Transport Units (STUs), responsible for procuring and operating buses, to replace over 32,000 old diesel buses with vehicles electric, said several people familiar with the development.

Twenty-five STUs, according to an estimate by MoRTH, own 32,062 buses that are more than 10 years old. According to a draft notice from MoRTH, permits for buses at the end of their 15-year life cycle will not be renewed, meaning they will have to be phased out.

Granted, some states, like Delhi, already have rules in place on scrapping old vehicles.

Most of the aging buses currently in use by STUs, with the exception of Delhi which has an all-CNG fleet, are BS-II or BS-III diesel buses which are not only highly polluting but also expensive to maintain and to exploit.

But STUs were badly hit by low usage in the aftermath of the covid-19 pandemic, when intra- and inter-city public transport was hit hard as commuters switched to personal mobility.

VC Sajjanar, Vice President and General Manager of Telangana State Road Transportation Corp., said: “Switching to electric buses is a good plan, but STUs have been in bad shape after covid-19. We are losing ₹4 to 6 crore per day due to increased operating costs as diesel prices have steadily increased. Electric buses will help reduce costs. We have nearly 2,000 buses nearing the end of their life and needing to be scrapped, but we cannot fund these orders when we incur losses – our operating costs are currently close to ₹20 crore, we only do about ₹12 crore or more. Even on a peak day with more than 70% utilization, we do ₹4 to 6 crore losses,” he said.

“We are asking MoRTH to participate and assist STUs through grants and sustainability gap funding. We will have to invest in setting up charging infrastructure and we can use government assistance here,” Sajjanar added.

CESL’s tender resulted in the discovery of prices for electric buses that were found to be less than or equal to the operating costs of diesel buses, prompting NITI Aayog to commission CESL to extend the exercise to a national level for 50,000 electric buses.

“STU is indeed keen on scrapping these old buses – they are inefficient and polluting. But we also need to keep STU’s finances in mind. Now that we know the prices are lower than diesel I am sure we can devise a proper mechanism to help them,” said Mahua Acharya, CEO of CESL.

A senior MoRTH official said: “The draft Disposal Notification has not yet been finalized given the financial constraints of STUs. But it is certain that they will have to replace the old and inefficient buses.”