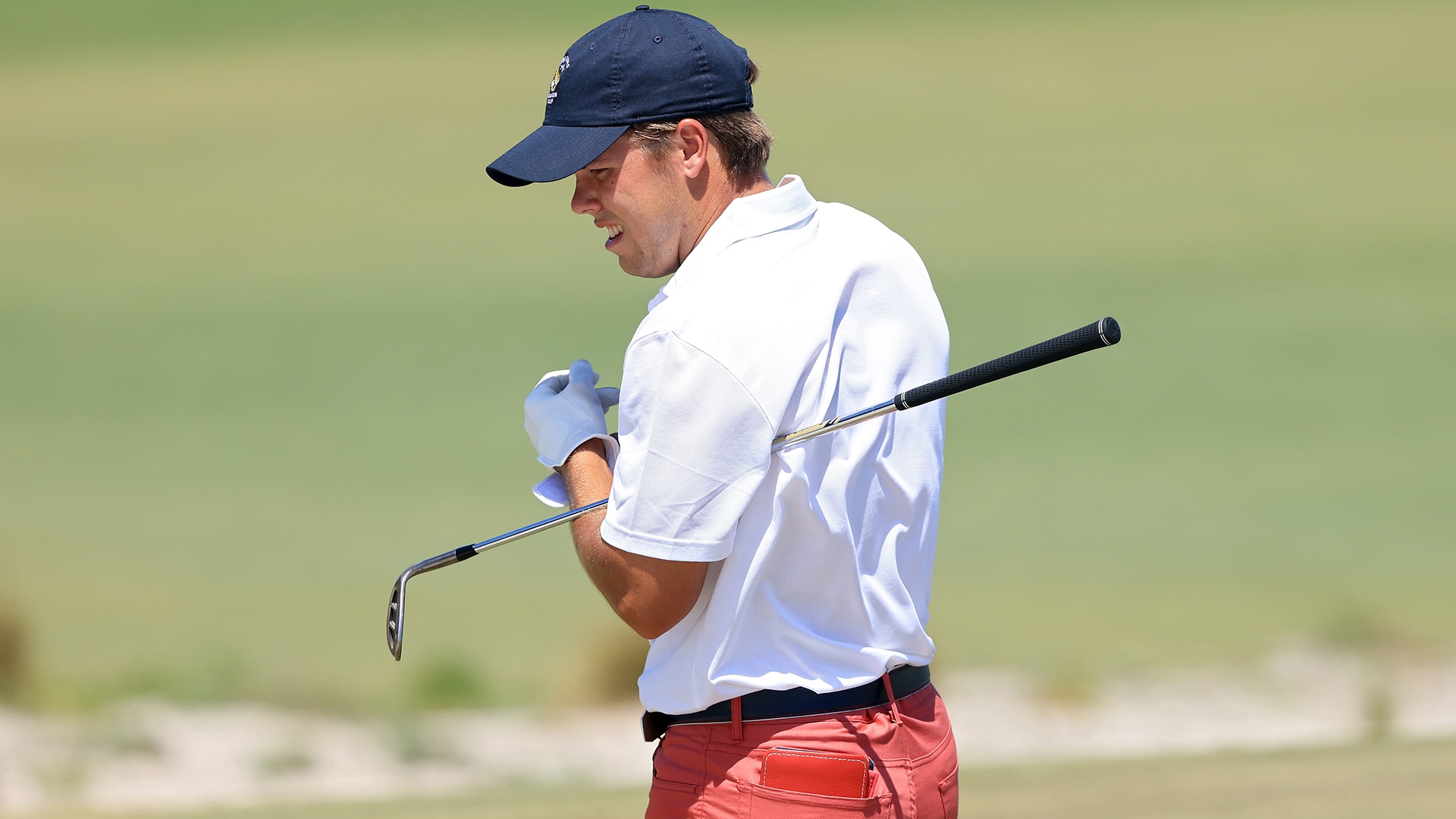 It was tough last month for Pierceson Coody, a senior rider from Texas.

After finishing his regular season at the Big 12 Championship at the end of April with his fifth consecutive top 6, Coody traveled to Seminole in early May to represent the United States at the Walker Cup. Of course, Coody was among those who fell ill from a stomach virus and he missed the opening session. He then returned to Dallas the following week for his PGA Tour debut, at AT&T Byron Nelson, where he missed the cup. Three days later, Coody was playing in an NCAA region, where he was tied for ninth.

He still hadn’t finished. Coody got a week off before the NCAA Championship, but he only played one round on Grayhawk before another random virus knocked him out again. Coody, who tested negative for COVID-19, mono, and strep, among other ailments, had a fever for almost a week, not fully breaking it until last Wednesday. That left him only five days to prepare for his final qualification at the US Open in Columbus, Ohio.

But Coody somehow gathered the strength to qualify, winning his place at the US Open in the playoffs on Tuesday morning after the game was pushed back to day two due to bad weather.

Thus, the busy stretch of Coody will continue. The recently named Big 12 player of the year will play in the Arnold Palmer Cup near Chicago this week before traveling to Torrey Pines for his major debut. He will be joined in San Diego by several other current and recent college players, including Ollie Osborne of SMU, who is exempt via his second amateur ranking from the United States, and final qualifiers Joe Highsmith of Pepperdine, Matthew Sharpstene of Charlotte, Matthias Schmid of Louisville, Spencer Ralston of Georgia and Andrew Kozan of Auburn.

Coody’s Texas teammate Cole Hammer is also on the field for the US Open after entering on Wednesday as Columbus’ first qualifying substitute. Hammer, who plays Congaree this week, replaced Mikko Korhonen, who has retired. This will be Hammer’s third start at the US Open.

With the end of the recruiting hiatus on June 1, college golf coaches aren’t the only ones getting to work this summer. This month will also see the start of the College Golf Experience.

New GCAA Approved College Golf Camp Program is committed to providing junior golfers unprecedented access to college coaches to learn more about college golf and the recruiting process while helping these golfers showcase their talents and achieve their goals.

CGX is the brainchild of well-known industry veteran Josh Jacobs, CEO of CGX and also Founder and CEO of TGA Premier Golf, a leading provider of introductory and recreational golf programs nationwide. Jacobs, who played Division III golf at Emory, saw an opportunity to revive the idea of ​​college golf camps.

“When I was a junior golfer, I had no idea of ​​the recruiting process. I had no idea what I was doing, ”Jacobs said. “I believe there are so many scholarship and coaching opportunities out there who want to see these juniors and engage with them and tell them about their schools, whether it’s the mid to low D1 level, whether it’s the D2, NAIA, whatever it is, there are a ton of opportunities here.

Fairly new recruiting rules prohibit contact between coaches and future college golfers until June 15 before a player’s first year of high school, except during these camps. For coaches who don’t have the time or the ability to run their own camp, this is where CGX comes in. Jacobs, with the help of former Arizona golfer Dylan Kornberg, who is CGX’s camp director, has created three types of camps: showcase, which will include coaches from several schools; conference, which will focus on a particular conference (the Ivy League has one scheduled for early next year); and institutional, which will be for a specific school.

The first camp, scheduled for June 11-12 at the Classic Club in Palm Desert, Calif., Is a showcase camp, and it will feature seven Division I coaches, including Jim Anderson of Arizona, Christian Newton of State. from Colorado, Ryan Donovan from San Diego and Pepperdine’s Assistant Blaine Woodruff.

“I can’t wait to be a part of the College Golf Experience launch camp,” said Anderson. “It offers a unique opportunity to pair junior golfers and their parents with university coaches. Campers will benefit from the time spent with coaches preparing for college golf and many questions will be answered about the transition process.

Newton added, “CGX camps are a great way to meet and interact with college coaches in a fun and relaxed environment. Juniors and parents will leave with a clear understanding of what college golf is like and how to achieve their junior and college golf goals.

In these camps, open to boys and girls ages 10-18, participants will participate in a mock college tournament or practice round, receive instruction and skill-based assessments from coaches, explore the weekly routine. golfer and team culture, and will gather information on the recruiting process, how to schedule junior tournaments and more.

“I think this is going to help junior golfers reach their goals and help these families really understand the path their junior golfer needs to take,” said Jacobs. “If you’re in first year or second year in high school and you’re evaluated by a DI coach, and he says, look, you have a handicap of 7, here are your average scores, I’m looking at your game, you really need to improve here, here and here, and if you want to play in Division I, you really have to achieve those goals, and that’s what we’re looking for.

“You get a real assessment of your game, and where you can take it and what you need to do to achieve your goals.”

Two big coaching announcements were made recently on the women’s side.

Chadwell, who is the husband of LPGA player Stacy Lewis, started the program in Houston in 2013 and led the Cougars to three AAC championships and six straight NCAA spots, a streak that included this season. He replaces former Aggies head coach Andrea Gaston.

“My wife Stacy and I are thrilled to have the opportunity to raise our family in Aggieland,” Chadwell said. “I want to thank Ross Bjork and Jeff Toole for believing in me and giving me the chance to lead this program. At A&M we have an amazing base to build something great and with the support we have from top to bottom I know we can do just that. I have admired the 12th Man from afar for a long time, and to be part of it now is a humbling experience. I can’t wait to get to campus to start preparing for the fall. Play them! “

Cantu just completed a season in which she not only guided the Terps to the national championships, but was also named the Big Ten Coach of the Year. She played for Tennessee, graduating in 2010.

“I am delighted and honored to have the opportunity to return home to Tennessee,” Cantu said. “As a proud alumnus, I know the history of the sports department and the women’s golf program. I am also well aware of the endless possibilities for success that our student-athletes receive. I look forward to continuing to build on the foundations laid by Judi Pavon. I know that with the facilities and resources provided by Tennessee – Day Golf Practice Facility and Blackburn-Furrow Clubhouse – we will be able to compete at a high level within our conference and nationally.

Changes to the University PGA Tour

As a few booming college seniors and juniors prepare for US Open starts and potential PGA Tour exemptions this summer, PGA Tour University has announced an adjustment to its point distribution process for professional events.

The changes will begin this week and will include a point limit for college players who miss the cup in a PGA Tour event. Players who miss the cut in these events will continue to earn points based on their final position as determined by the Amateur Golf World Rankings, unless that total exceeds eight points. In this case, the maximum number of points for a missed cut would be capped at eight.

The only exception is the big leagues, where players will be able to collect all the available points, even if they miss the cut. Players who are successful in a PGA Tour event will also continue to earn the total number of points for the PGA Tour U.

The PGA Tour U also announced that players may receive full points at other selected professional tournaments, at the discretion of the PGA Tour University and determined prior to the start of the tournament.

A preliminary ranking of the 2022 class will be published in July.