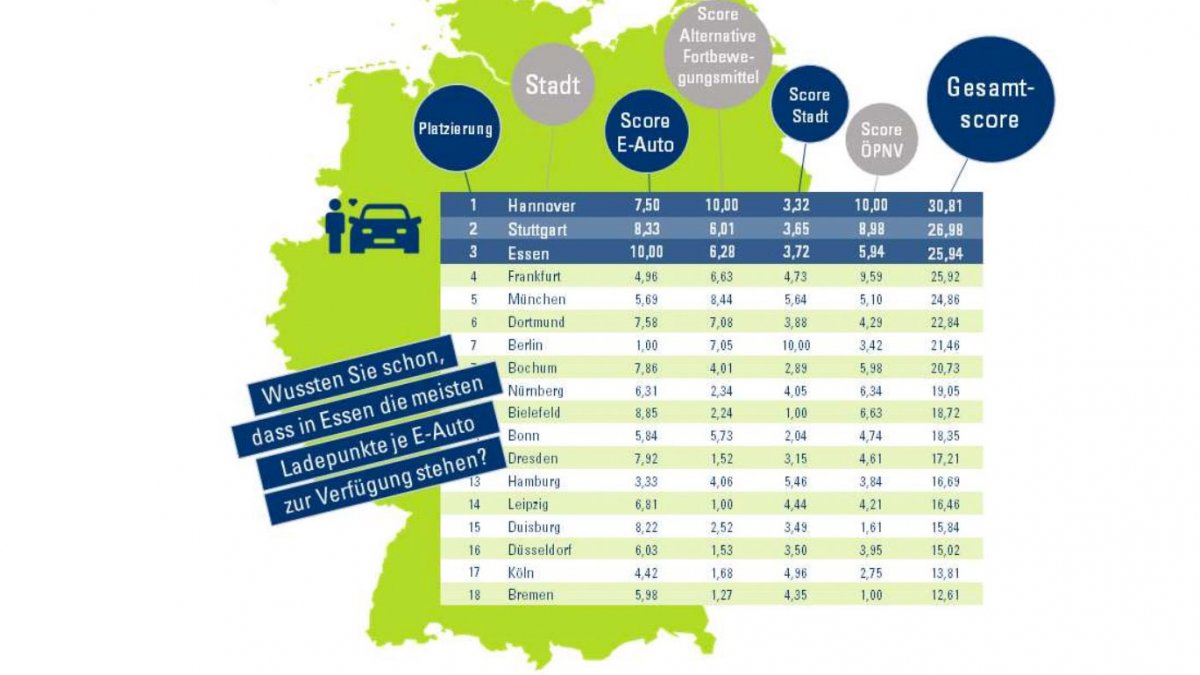 
The insurance company Cosmos Direct operated 18 major German cities under concepts of electric mobility, public transport, alternative means of transport and general mobility in the city. Hanover takes first place, ahead of Stuttgart and Essen. Bremen was at the bottom of the table, where criticism of the study was quickly strong.

Hanover got the highest value of 10 in the scores for alternative means of transport and public transport, the city scores less in the car-related areas – unlike Berlin and Essen. For the rating of public transport, Cosmos Direct took into account, among other things, the size of the line network, the proportion of daily passengers in the population, the price and the proportion of alternative routes within the bus fleets. Alternative means of transportation included factors such as the number of standing scooters and carsharing cars per 1,000 inhabitants and the number of bicycle rentals per square kilometer.

For general mobility, the insurance company calculated the density of cars and the area occupied by road traffic in the city. Cities with a lower share of traffic area in total land area were rated higher here, so that there is also sufficient space for other forms of mobility. Essen obtained 10 points in the field of electric mobility with approximately one public charging point for two registered electric cars. The number of electric and hybrid cars per 1,000 inhabitants has also been included in the electronic ranking.

Maike Schaefer, senator for transport at the bottom of Bremen, describes the study as completely questionable. According to the daily Messenger Weser she noted that the study viewed high car density as positive.

Bremer Straßenbahn AG (BSAG) criticizes the data used. For example, a day ticket at price level I currently costs 8 euros, and 8.30 euros was used for the survey. Also, these tickets are more likely to buy tourists, while locals tend to use single tickets or monthly tickets. In fact, however, the BSAG is doing badly when it comes to electric buses, as they don’t use them yet.

The transport senator objects, however, that it is foolish to include only the proportion of electric buses, but not all of electric mobility such as electric-powered trams. A comparison of cities makes sense anyway, as Hanover is more compact than Bremen, and local public transport reaches more people in a larger area.

BUND Bremen notes that the number of alternative means of transport does not allow conclusions to be drawn on their actual use. In addition, the inhabitants of Bremen use the bicycle to get around above average, and Cosmos Direct has ignored this.

Disclaimer: This article is generated from the feed and is not edited by our team.

Bus market in Europe, by length, by seating capacity, by