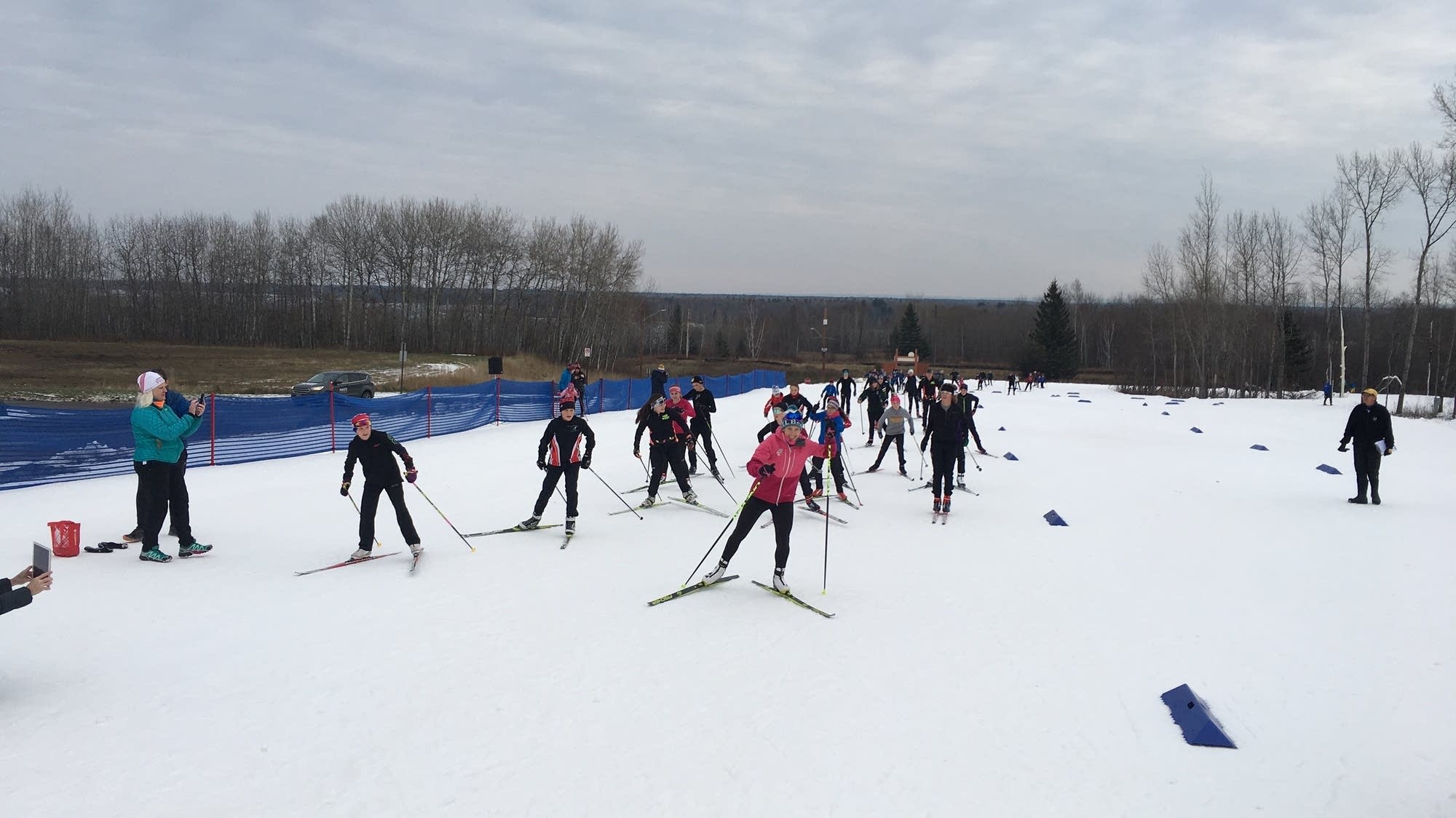 Hundreds of the nation’s fastest cross-country skiers will compete in a national SuperTour race this weekend in Duluth, with a chance to earn points to qualify for the U.S. Olympic team which will compete in Beijing in February.

And it’s a safe bet that just about every one of those skiers will be coating the soles of their skis with wax containing per- and poly-fluoroalkyl substances – a family of man-made chemicals known as PFAS. – which have polluted water supplies around the world, including Minnesota.

So-called â€œforever chemicalsâ€ are used in a wide variety of products, from non-stick cookware to fire retardant foam, to water resistant rugs and clothing.

For decades, they have also been used to make super-fast fluorinated ski wax, popular with cross-country ski racers.

And they can make a huge difference in how quickly a rider skis, especially in hot, humid conditions.

“In these warmer conditions, using any fluorinated wax versus non-fluorinated wax, I mean it can be 10, 15, 20 percent [faster]”said Jeremy Hecker, race service manager at Pioneer Midwest, a ski shop in the Twin Cities.

Hecker is also a longtime trainer and technical representative for the Rex ski waxing company. He says he can feel the difference when he puts different wax on each ski.

â€œWhen I put fluoride wax on non-fluoride wax, it’s almost like sandpaper on a ski. I mean it’s slow.â€

The obsession with wax

Many Nordic skiers are obsessed with waxing. There is an endless variety of different waxes designed for all varieties of snow. It can be difficult to get it right. Skiers will tell you that there is something almost magical about identifying the perfect wax, which allows them to glide almost effortlessly on snow. This is what fluoride waxes can provide.

But the same properties that make these chemicals so useful in ski wax also make them bad for the environment, because they don’t break down over time. They are incredibly durable.

Long-term exposure to certain PFAS has also been linked to negative health effects, including kidney and thyroid problems, low birth weight, and some cancers.

Scientists have found high levels of PFAS in the bodies of ski waxing technicians, as well as in water and soil near ski slopes from Sweden to Maine.

Sophie Greene, PFAS coordinator at the Minnesota Pollution Control Agency, said it was difficult to quantify the impact of a single race like Duluth’s. But she said even small amounts of these chemicals can have disproportionate environmental impacts.

Fish, for example, can absorb some of these chemicals like sponges.

“And what we’re finding is that even incredibly low levels of a chemical like PFOS in the surface water body can lead to high enough levels of that chemical in fish that we need to advise. people to reduce their fish consumption for safety reasons. “Greene said.

The MPCA does not have the power to ban chemicals – it should come from the state legislature. Earlier this year, the state released a PFAS master plan, which recommends eliminating â€œnon-essentialâ€ uses of these chemicals.

A need for testing

Many cross-country ski associations have already banned fluoride waxes or are planning to do so soon. The European Union has blocked the manufacture of certain varieties of waxes with a high fluorine content.

“I don’t think there is anyone in ski racing right now who is saying openly and publicly that we should allow fluorocarbons to continue as they happen,” said Chad Salmela, cross-country trainer. at St. Scholastica’s College in Duluth, and the founder of the cross-country ski team there.

For Salmela, who is also an Olympic ski commentator on NBC, and many other members of the skiing community, health issues are more pressing than environmental issues, which they say are very small and localized compared to others. uses of chemicals.

â€œI had fluorocarbon mostly under my fingernails, in the folds of my skin and probably in my hair follicles,â€ he said.

Salmela contracted Parkinson’s disease about six years ago. And although he has no idea what caused it, he said that all those years of waxing weighed heavily on his mind. “What if that’s what made the right side of my body shake?” ” he’s asking himself.

Salmela and others say sports can’t get rid of chemicals fast enough. The problem is trying to control a ban when there are still so many fluorocarbon waxes in the wax boxes of teams and individual skiers.

The big hurdle for competitive racing is that there is not yet a quick and accurate test available to reliably test skis for fluoride waxes. It takes about three weeks to get current test results, said Gary Larson, head of competition for the Duluth SuperTour race.

“And we want to have a test where you can go in the start, have your skis tested, and they say ‘yes’ or ‘no’, right there. And if you’re okay, then you go in and you start and do your race.”

Without this test, say the race organizers, it is too easy for an athlete to cheat. And there’s a lot at stake this winter with the Olympics on the line, as well as placement in other elite national teams.

That’s why US Skiing is allowing fluorocarbon waxes in races through mid-January, including the Duluth race and a race the following weekend in Cable, Wis.

â€œAs much as our American ski and snowboard staff and our community want to be immediately fluoride-free, the cross-country sports committee felt it was imperative to ensure the sanctity of the Olympic selection process, as well as the selection of all of our championships. development teams, â€wrote Chris Grover, director of the US Ski & Snowboard Cross Country program, in a letter explaining the decision.

In recent years, the Minnesota State High School League has also made an exception for wax, asking coaches not to use it during regular season meets, but allowing it in section and state matches. .

But this year, for the first time, high school skiers will not be allowed to use fluoride waxes at any race.

â€œWe all recognize the long-term impact of these PFAS chemicals on our environment. I think there has been a good faith effort by the coaches and the high school teams to eliminate the use of this stuff.

Meehlhause said it was also a matter of fairness, as a single small bar of high-fluorine wax can cost over $ 100.

While runners are increasingly not allowed to use fluoride waxes, recreational skiers are still allowed to use the products on the trails around Minnesota.

Gary Larson said he and other skiers plan to make Duluth a “town without fluoride wax” – which some other areas of the upper Midwest have done – after the end of this weekend’s race.

â€œIt’s not something that could be imposed. So it would be more of a policy to just say these are bad chemicals, and we don’t want them in our park system, â€he said.

You make MPR News possible. Individual donations are the source of the clarity of our reporters’ coverage across the state, the stories that connect us, and the conversations that offer insight. Help ensure that MPR remains a resource that brings Minnesotans together.

Make a donation today. A donation of $ 17 makes a difference.

Christmas for seniors, stuff the bus at KGET studios