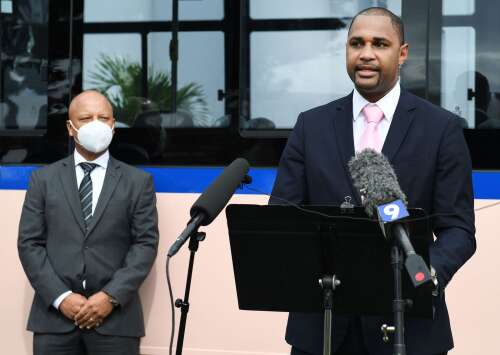 A fleet of electric buses will mean a ‘significant reduction or even elimination’ of cancellations, the director of the Department for Public Transport said today.

Roger Todd said the 30 high-tech vehicles would also be better suited to the island’s narrow roads than the older buses.

He added that the new buses, which are expected to hit the road in a month, will cut costs by 50% compared to older diesel buses.

Lawrence Scott, the transport minister, said the arrival of the first buses was “a huge step forward, guiding Bermuda towards a cleaner, more resilient future”.

He added that the new buses were “appropriately sized for our roads, with lower floors and knee suspension” to improve access.

Another 20 buses will arrive in two shipments on March 28 and April 4.

The 28-seater buses, which are smaller than the 38-seater diesel models currently in use, will not cause changes to bus schedules or routes.

Temporary charging stations will be installed for buses until permanent units are connected to the DPT headquarters in Fort Langton, Devonshire.

Electricity company Belco is carrying out trenching work from the National Stadium to Barker’s Hill as part of the bus garage installation process.

Engineers from the manufacturer, the Golden Dragon Bus Company in China, will spend three months on the island to train DPT personnel.

Mr Todd said the buses were ‘brand new, straight out of the factory, with a 12 year shelf life’.

The buses are equipped with CCTV and reversing cameras and have USB chargers at the seats.

The reduction in emissions should be the equivalent of 1,500 fewer cars when all the buses are operational.

Mr Scott said the vehicles positioned Bermuda as “one of the Caribbean leaders in the transition to electric public transport“.