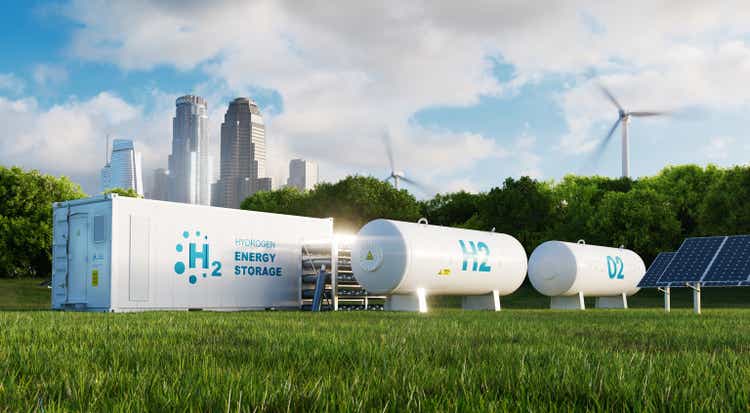 Investment thesis: Europe’s quest for a green energy future makes it imperative to adopt green hydrogen strategies in order to have a chance of stabilizing energy supply flows. The idea is that part of the wind and solar power generated can be transformed into hydrogen by electrolysis, which is then stored and released to power backup generators whenever wind and solar power generation fails, due to weather conditions.

Fusion Fuel Green PLC (NASDAQ:HTOO) is a company potentially well placed to grow and prosper amid massive EU subsidies intended to boost the industry. It produces hydrogen by electrolysis powered by solar energy. It also sells its technology to other companies looking to do the same. Although there may be many pitfalls along the way, which makes Fusion Fuel a risky bet. There are many reasons to expect this stock to do very well in the months and years to come.

Fusion Fuel has a number of projects In progress

Currently, Fusion Fuel has 15 units of its HEVO-Solar generators installed in its H2Evora project. Each unit is capable of producing just over a ton of hydrogen per year, and the project will eventually see 55 units become operational. This will produce up to 60 tonnes of hydrogen per year.

A number of other projects in Portugal, Spain and Morocco are in various stages of development and planning. Its Benavente project in Portugal aims to start operations in a few months, and it is to be increased to an electrolysis capacity of 500 MW by 2025. Another project in Sines, Portugal, aims to produce 418 tonnes of hydrogen , part of which will be transformed into ammonia.

At the moment, there are few fruits of Fusion’s efforts available to count. Its financial results reflect the profile of a company that is in the process of investing, with very little to show in terms of revenue. It is currently trading at a forward EPS of -2.22. In the fourth quarter, it recorded an operating profit of 11.11 million euros, but this in no way reflects the company’s profitability prospects. For the first quarter that year, its operating loss was 3.84 million. The profitability prospects of its projects and contracts are currently an unknown. None of these numbers tell us much at this time. Certain factors, including perhaps green hydrogen subsidies in the EU, government support for investments and other policy initiatives, are likely to play a major role in the outcome.

EU policies are likely to advance the green hydrogen industry

Apart from the issue of rising hydrocarbon costs which make it more expensive to produce hydrogen from feedstocks such as natural gas, at least in some places like Europe, the EU is also likely to encourage this industry through a a number of measures. It can grant subsidies and impose tariffs on imports of hydrogen derived from natural gas. It can downright limit the use of hydrocarbon-derived hydrogen consumption, while offering financial support to economic activities involved in the production of green hydrogen, while facilitating the growth of demand.

Currently, the EU has targets in place, including the target to produce 10 million tonnes/year of hydrogen by 2030. A number of EU initiatives are in the pipeline, which, once agreed in final negotiated form, will reveal exactly how extent of support the industry will receive. Given the growing urgency the EU feels to reduce its energy dependence on Russia, the level of support is likely to be substantial.

Fusion Fuel is poised to become a potential major player in the growing field of green hydrogen in the EU. It has its own technological solutions, which other companies are obviously also interested in using. EU support for the industry is coming and it will be significant, based on all we know. It might even exceed the most optimistic expectations. Fusion Fuel’s stock could therefore see a significant rise from current levels in the months and years to come. We are looking for a potential growth stock, in a global context where such prospects are less and less available to investors.

Although the benefit is very significant, it also carries a significant risk. I don’t think there is much risk that the EU will not support this emerging industry. Even if the EU fails in this regard, EU member states are likely to implement their own support strategies, which can have a similar effect. There remains the challenge of overcoming cheaper hydrocarbon-derived hydrogen, particularly from outside the EU. Russia, Qatar, Iran, the United States and other countries with large natural gas reserves could increase their production, which can then be exported. The high cost of natural gas in the EU makes it increasingly expensive to produce hydrogen from hydrocarbons, but things look somewhat different in other parts of the world, where local gas supply natural can be much cheaper. If the EU does not implement the right strategies, cheaper hydrogen imports could destroy the prospects for green hydrogen.

There are also competitors in the green hydrogen industry that Fusion Fuel must contend with. Shell (SHEL), for example, is betting heavily on green hydrogen production in the EU, as part of its plans to transition away from oil and gas. Legacy energy companies could potentially flood the European market with green hydrogen, making it difficult for Fusion Fuel to compete. That said, Fusion Fuel, with a market capitalization of just over $100 million, has much greater upside potential in terms of stock price gains than Shell, which needs to scale up its green initiatives. important enough to help him. reach its current market capitalization of $221 billion. In my opinion, there are more downsides to Shell in this regard than to Fusion Fuel. Fusion Fuel has a significant advantage, while Shell will be lucky to maintain its current market capitalization, given the massive contraction in its oil and gas business.

Fusion Fuel also lacks the potential to compete in parts of the EU, where wind power will be more economical than solar power, given weather conditions. It is no coincidence that he mainly focuses on the Iberian region. At the same time, it gives it potential respite, as most wind projects will likely focus on the northern part of the EU, leaving the southern part of Europe more open for Fusion Fuel to thrive and grow.

There are even ideas circulating about nuclear energy used to produce hydrogen by electrolysis. Such a plan floats in Hungary. By 2030, it could have two new nuclear reactors in place, while it is unclear whether the old reactors will be decommissioned by then. I don’t know if there is a net benefit to producing hydrogen from nuclear energy. Nuclear energy is very stable, so it would make sense to feed it into a stable direct source in the grid, rather than storing the energy in the form of hydrogen. Nevertheless, it could become another competing source of hydrogen supply in the EU, if it materializes.

Although there are some potential pitfalls, Fusion Fuel is certainly an intriguing investment opportunity in the larger context of the global energy upheaval we are facing this decade. We know there will be changes, with winners and losers emerging along the way. Given what we currently know, this is a potential winner, which is why I decided to take a small position in this title.