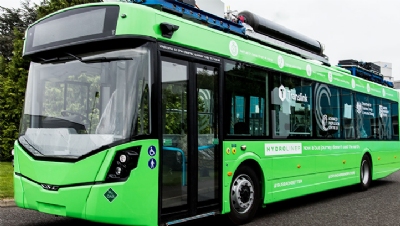 Public transport operator Go-Ahead Group has agreed a 15-year hydrogen supply contract, as it strives to have a fleet of fossil fuel-free buses in the UK by 2035.

The company confirmed this week that it is negotiating an order for a further 34 hydrogen-powered single-decker buses from Ballymena-based Wrightbus, following an order for 20 of the vehicles placed in 2021. The first buses will be delivered in June and, once the 54 buses are integrated into the Go-Ahead fleet, the company will have the largest local fleet of hydrogen buses in Europe to date.

Go-Ahead’s Crawley depot will be the base for the new buses, which will serve Metrobus routes across Sussex and Surrey, including Crawley, Gatwick Airport and Horley.

Go-Ahead also signed a 15-year hydrogen supply contract with Air Products. Air Products will deliver the hydrogen to the Crawley depot in liquid form and it will be converted, on site, into gas ready for use in vehicles.

However, the carbon footprint of hydrogen throughout its life cycle depends on how it is made. A Go-Ahead spokesperson told edie that Air Products will initially supply hydrogen from a variety of sources. The spokesperson said the company’s intention is for hydrogen to “be of a level of renewal and sustainability” to qualify for the UK government’s green bus service operator grant.

Air Products confirmed last summer that it was developing its first gigawatt-scale green hydrogen production facility in a partnership with ACWA Power, ThyssenKrupp and Neom, set to begin operations in 2025.

Go-Ahead group chief executive Christian Schreyer said the hydrogen supply deal, which is the company’s first, “represents an important step” in the transition to a zero-emissions bus fleet. by 2035. This goal is part of the company’s broader ambition to reach net zero by 2045.

Schreyer said, “We are delighted to be working with Air Products and with Wrightbus. It is an example of what can be achieved through a mix of public and private funding, and cooperation between different environmentally friendly partners.

The UK government has pledged to set an end date for the sale of new diesel buses and is expected to announce the agreed deadline this year. It has also pledged to support the delivery of 4,000 new zero-emission buses and associated charging infrastructure by 2030. Along with the green light, zero-emission bus procurement targets have been set by companies such as First Bus, Arriva, National Express and Stagecoach. .