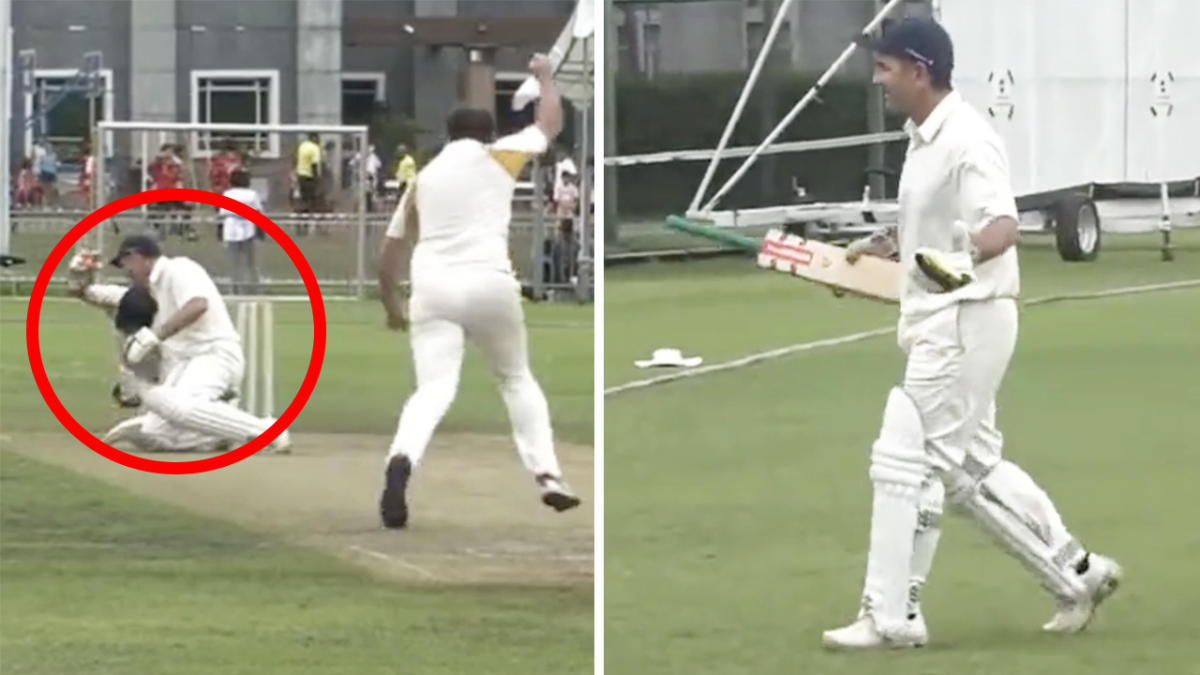 Justin Langer is a famous competitive cricketer, but former Australian coach could need some time in nets after a hilarious dismissal while playing in Singapore.

The former Test batsman has maintained a relatively low profile since he quit as Australia coach earlier in 2022, but that hasn’t undermined his love for the game at all.

Langer tied the pads for Woodpeckers CC in Singapore last week, but as social media footage shows, not everything went to plan.

Most cricket fans would have expected the crafty West Australian to absolutely put aside a high, slow looping ball sent to the side of the leg – and clearly, Langer too.

Unfortunately for the 51-year-old, his sweeping shot was a big swing without a ding, the ball sailing to the keeper who did some clever glove work to get Langer out.

The bowler, naturally if you had just miraculously beaten a high-quality Test batsman for the steal, amusingly charged into the middle of the wicket in celebration, while Langer could only watch in disbelief.

Wearing a wry smile as he left the field, Langer simply shrugged once he returned to his team at the border.

The moment was a lot of fun, with Langer posing for photos with nearby fans soon after.

It wasn’t ideal for the Woodpeckers, who found themselves struggling at 4/31 as Langer was out for 7.

Langer quit coaching Australia in February after being offered an insulting six-month contract extension as he guided the team to the T20 World Cup and Ashes glory.

Player power is believed to have played a significant role in Langer’s exit, with reports that members of the Australian squad were let down by his intense style of man-management.

A rumored rift in Langer’s relationship with a core of senior players led to CA’s decision to push the 51-year-old out.

Speaking at a WA Chamber of Commerce and Industry event in Perth, Langer clearly still harbored resentment over the way he had been treated – particularly in relation to interim CA boss Richard Freudenstein.

The 51-year-old recalled a conversation he had with the acting AC chairman the day after he stepped down as Australia coach, and the lack of support he he felt from the country’s powerful cricket brokers.

“The first thing he (Freudenstein) said to me was, ‘It must do you good that all your buddies are supporting you in the media,'” Langer recalls.

“Ironically, the last six months of my coaching career have been the most enjoyable period of my 12 years of coaching.

“Not only did we win everything, but I had energy, and I was focused, and I was happy – on top of bullish politics.”

Australia have since named Andrew McDonald as Langer’s replacement.

Click here to sign up to our newsletter for all the latest stories from Australia and around the world.