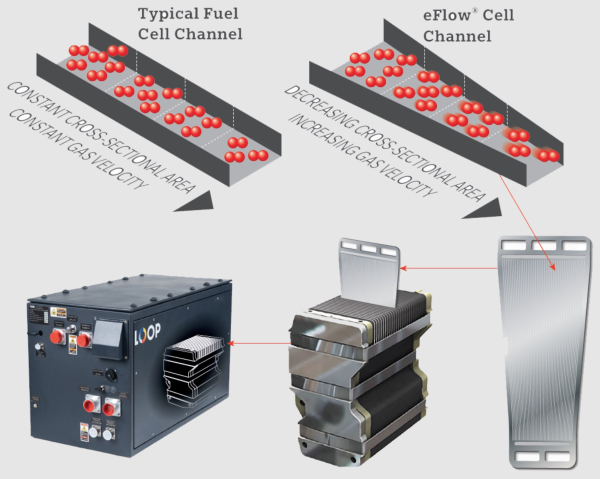 The announcement marks the acceleration of adoption of the eFlow fuel cell platform in the vertical transit bus market as well as Loop Energy’s official entry into the zero-emission commercial vehicle market by South Korea.

A standard flow channel in a fuel cell is based on a constant cross section. With this design, the mass flow rate decreases in proportion to the rate of consumption and hence the flow velocity also decreases. This leads to uneven flow distribution, resulting in more variable stack performance compared to single cell measurements. In contrast, eFlow channels feature a cross section that converges along the length of the channel to compensate for the reduction in mass flow due to reagent consumption. This design levels the availability of reagents throughout the flow channel.

With Loop’s cutting-edge technology and NGVI’s expertise in systems integration and customer network, we believe we can make hydrogen electric transit a reality in South Korea and beyond. Our fully integrated fuel cell system product line incorporates much of the information we have gathered from customers, and the performance has been nothing short of outstanding. From field data arriving daily from the previously announced municipal bus fleet in Nanjing, China, to new customer engagements in Eastern Europe and now in Korea, we are very pleased with the success we have had in the public transport buses in recent months.

As part of the first phase of the multi-year agreement, Ulsan is expected to invest KRW 2.3 billion (approximately US $ 2.0 million) by 2024 in the testing and certification of hydrogen bus technologies, provided by a consortium of partners including NGVI. Ulsan announced a plan in 2018 to replace 40% of the city’s 949 buses with hydrogen vehicles and establish 60 hydrogen refueling stations by 2030.

After development and demonstration, the buses are expected to expand to the fleet used in the capital region where Seoul Bus Company and TCHA Partners own more than 1,200 buses. The city says demand will increase as around 10% of Seoul’s buses are replaced or taken out of service each year. The number of buses owned by them is expected to exceed 2,000 by 2023 and demand in the metropolitan area is expected to exceed 200 per year.

The future of the bus transit fleet depends on hydrogen fuel cell technology, and we are extremely happy to launch the project with NGVI. For the economy to work, fuel efficiency is important to us as it accounts for the largest share of our total operating costs, and we are committed to using vehicles equipped with the most advanced hydrogen fuel cell systems. that NGVI can provide.

Our major shareholders include some of Korea’s largest bus fleet operators. As a result, we have a unique level of appreciation for the impact of the cost of vehicle ownership on how quickly South Korea’s bus transportation adopts hydrogen technology. We chose to partner with Loop Energy because their products combine performance and economy into a single value proposition that gives fleet operators exactly what they want.

“We are doing a very good job”: Hawaii on track to meet zero emission deadline