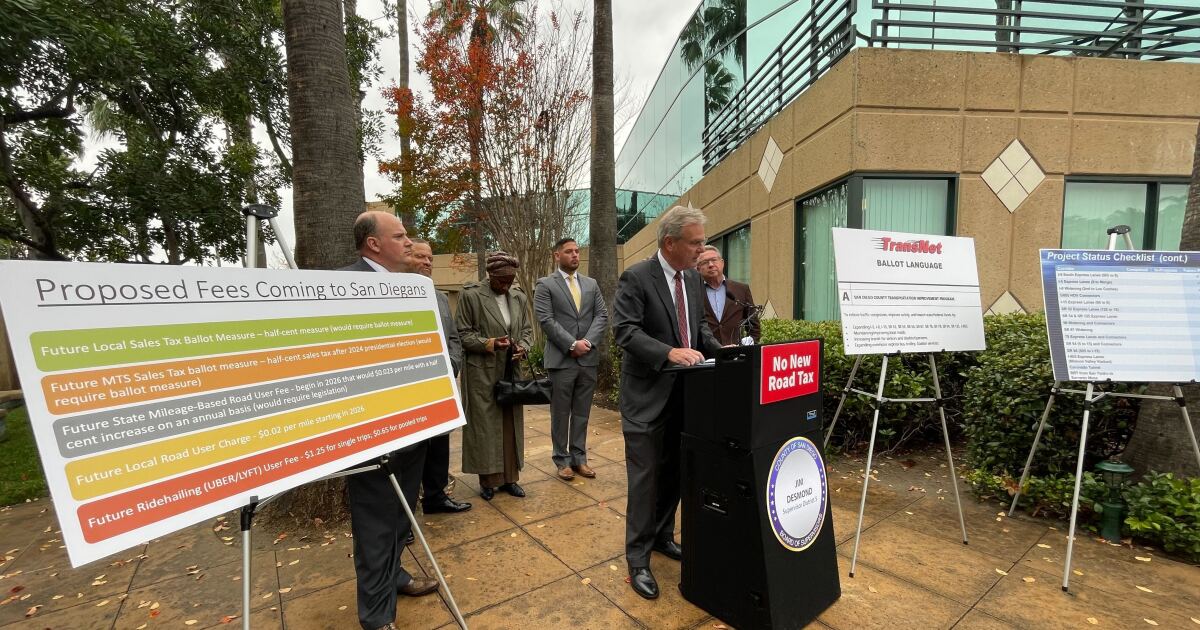 “Tomorrow, the SANDAG board will vote on the most expensive transport plan in human history,” said Jim Desmond at a press conference he led to oppose the San Diego Association of Governments regional transportation plan, or SANDAG.

While not the most expensive in human history, at $ 163 billion over 30 years, it’s $ 33 billion more than the last plan.

â€œAnd they plan to pay for it by taxing people out of their cars and on buses and trains,â€ Desmond said.

The plan includes a road tax of 2 cents per mile to help fund public transportation. Desmond said it was unfair to residents of his North County District and Rural East County.

“It is naive to think that the communities that depend on the roads in the north and east of the county, Fallbrook, Alpine, Santee, Valley Center, Julian, could be effectively served by public transport, but each of these people in these communities will pay for the tax, â€Desmond said.

Last week, three Democratic members of the SANDAG board opposed this part of the plan.

“If you look at the buses and the carts they are completely empty, if you want to be safe and have a good social distance with COVID, sit in a bus or a cart because you will be there alone,” said the Mayor of El Cajon, Bill Wells.

“Because San Diego isn’t designed to be a transit city, it’s a very, very big, almost 5,000 square miles, it’s a very, very big area, that’s not all. just not practical for people who live in my area to take public transit to the grocery store, to their work, to the children’s soccer games, â€he said.

“And these are hard working blue collar families who will be neglected because these roads they depend on will not be widened and they will try to force these families to get on buses and trains and that is not realistic for North County, â€Rodriguez said.

He also said that turning existing lanes into toll lanes makes a bad idea even worse. â€œIt’s really going to create unnecessary burdens for these families who are just trying to live and go to work and achieve their American dream,â€ Rodriguez said.

These leaders have said they want a more realistic plan that uses technology to reduce emissions, that is more inclusive and less costly.

â€œIf we’re going to stop the state, the federal government, and the local government from taxing us to oblivion, we have to stand up and say, ‘No, that can’t happen!'” Wells said.

When it comes to buses, will hydrogen or electricity win?