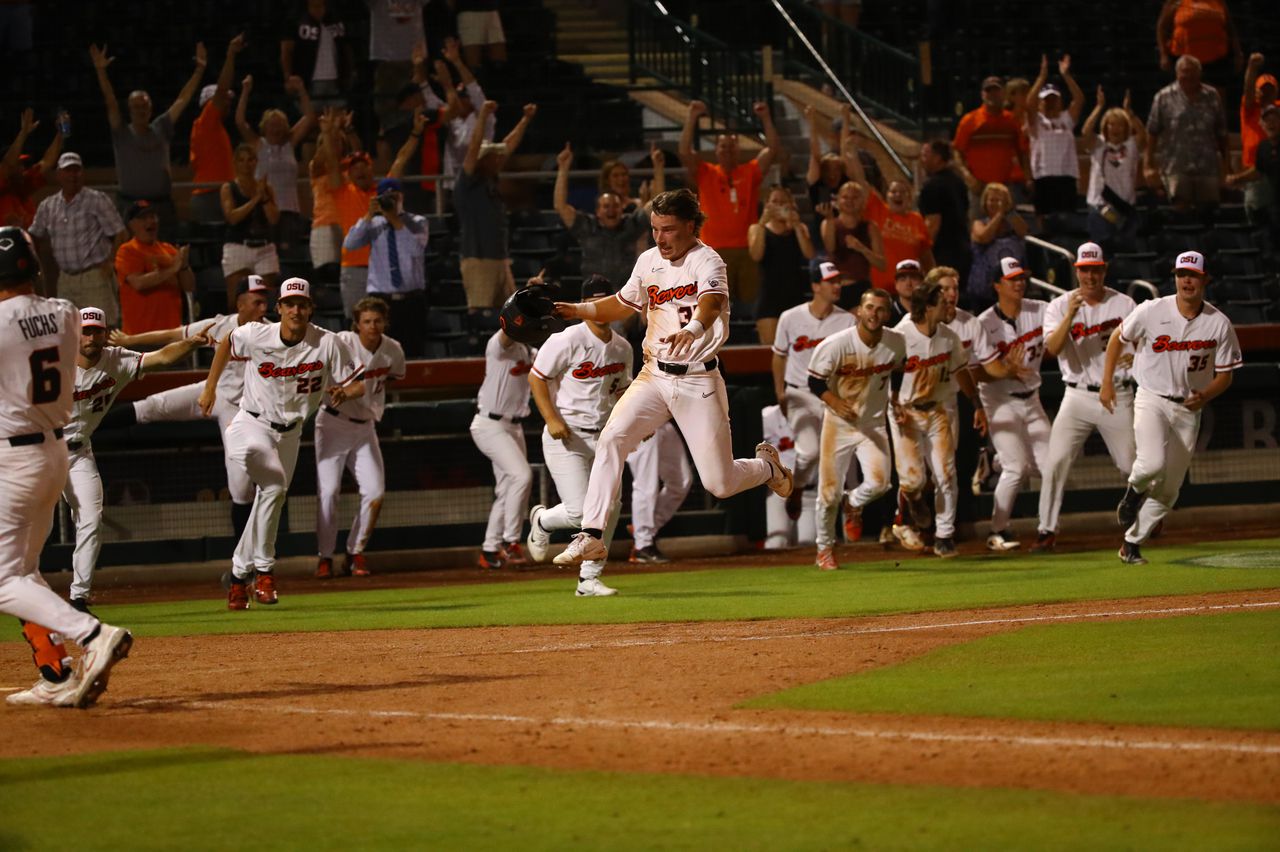 As Jacob Melton lingered on the grass at Scottsdale Stadium late Saturday night, sporting dirt stains on the front of his untucked jersey and Gatorade stains on his back, he tried to sum up the improbability of the Oregon State Beavers day. But he couldn’t find the right words.

“I don’t think there are words for this day,” Melton said. “It was the craziest day in baseball I’ve ever seen.”

It featured two games, two wins, nine hours and 34 minutes of baseball, 62 carries, 79 hits, 875 pitches, a colossal slump and too many twists to count.

But in the end, the Beavers persevered, beating the UCLA Bruins 8-7 in Game 2 of a memorable doubleheader to advance to the championship game in baseball’s first Pac-12 tournament. They will play Stanford at 7 p.m. Sunday.

But whatever happens in the first title game, it certainly won’t compare to Saturday’s mayhem, which left longtime broadcasters and broadcasters, tournament officials and die-hard baseball fans in the dark. disbelief, claiming it was unlike anything they had seen before.

“Overall a very crazy day, to say the least,” OSU coach Mitch Canham said, later adding, “I haven’t seen anything like it. “

It started at 10 a.m. Saturday, when the Oregon State team buses pulled out of the team hotel. And it didn’t end until 12:01 a.m. Sunday, when the last of the OSU players slowly emerged from gigantic concealed gates along the center field fence toward those same buses. In between, there was endless drama.

The second-seeded Beavers (44-14) entered Saturday needing a win to secure a date with No. 1-seeded Stanford in Sunday night’s championship game, while the third-seeded Bruins (38-21) needed two wins.

UCLA made it clear early on that they weren’t going to turn around, chasing OSU starter Jake Pfennigs in the first inning on their way to building a 7-2 lead after two. And the fireworks were just beginning.

With Garret Forrester hitting home runs on the opposite court, Gavin Logan ripping doubles and Justin Boyd spraying the ball all over the field, the Beavers offense burst, scoring four runs in the third…and then three runs in the fourth. …then five points in the fifth…then three more points in the sixth. Oregon State was leading 17-10 and was apparently on course for the title game. By the ninth, the lead had grown to 21-12 and the final three outs seemed like a formality.

But a trio of Oregon State relievers coughed up heads in stunning fashion, as DJ Carpenter, Victor Quinn and closer Ryan Brown gave up nine runs, four hits, three walks and a batter. Surprisingly, the Bruins came back all the way, tying the game 21-21 when Jack Holman brought Kenny Oyama home with one out at first base.

The Beavers infield was playing on the play and Forrester lined up the grounder cleanly and went home with the ball. But his throw veered left toward the first base side and hopped toward the plate, causing Logan to rush for the ball, pick it up, then whip a tag toward the third base side.

Oyama not only beat the pitch, but Logan injured his hip on the play and had to leave the game.

As the meltdown unfolded during the inning, Logan crouched behind home plate in disbelief.

The Beavers responded to the collapse by scoring a run in the top of the 10th, when Boyd singled down the middle. Still, they were leading 22-21.

But the Bruins had too much momentum. Brown, who emerged as a closer stop midway through the season, allowed back-to-back hits, intentionally ran the bases loaded, then pushed off the bind run. A pitch later, he surrendered a three-run homer to Tommy Beres, and UCLA won a stunning, 25-22, celebrating in a home plate crowd.

The game lasted five hours and 44 minutes and was a fantasy baseball manager’s dream. The teams combined for 47 runs, 53 hits, 20 walks and 79 baserunners. Oregon State finished with a school-record 28 hits and a season-high 22 runs, while Boyd finished with a school-record six hits and four runs, Forrester had two homers and recorded six RBIs, and Logan drove in five hits and five RBIs. .

Sixteen different pitchers made an appearance, including nine for the Beavers, and 26 different players had at least one at bat.

Then, after the emotional marathon, the teams had to start all over again.

Between games, it was relatively quiet in the Beavers clubhouse, they said, as players processed their meltdown and tried to regroup. They put on fresh uniforms, drank fluids and, Canham said, did their best to “rinse” an ending in which “we didn’t do anything right.”

“There wasn’t much to say,” Melton said. “I think the guys were a little delirious after that six hour game. But we kind of used it as a mental reset and tried to prepare to come back and play game two.

Several players struggled with cramps and tight muscles from Arizona’s triple-digit heat and hydration, and some sat out Game 2 or left early. Wade Meckler didn’t start for the first time this season and Boyd was called off after the first inning, forcing Canham to face first-year second baseman Travis Bazzana in center field for the first time in his career. Logan missed the game because of his sore hip.

Still, the Beavers struck first, scoring four runs in first and one more in second to quickly take a 5-0 lead. But UCLA rallied – again – and in the seventh, when Holman ripped a two-run single to center with two outs, the Bruins led the beleaguered Beavers 7-6.

But this time, the return was temporary.

Kyle Dernedde opened the bottom of the ninth with a single downfield, diving headfirst to beat the pitch, and Bazzana then doubled down the left field line to put the runners up to second and third with one out. . Forrester followed with a pop-up to second base, seemingly ending the momentum. But UCLA infielders Daylen Reyes and Jake Palmer collided on the infield in the confusion and the ball landed, sending Dernedde home to tie the game 7-7.

A batter later, Melton ripped a 2-2 slider to left field to drive in Bazzana and end the game. This time it was Oregon State celebrating a knockout victory, as the Beavers players emerged from the dugout and assaulted Melton near second base.

Later, while conducting a post-game interview on the Pac-12 Network, Bazzana and Greg Fuchs doused Melton with a bucket of Gatorade.

After nearly 10 hours of baseball, a monumental meltdown and a pair of hits, the Beavers had survived to play in the first-ever Pac-12 Tournament Championship Game.

“It takes courage to come back and play a game like this after a loss in Game 1,” Melton said. “I think it speaks to who we are as a team.”