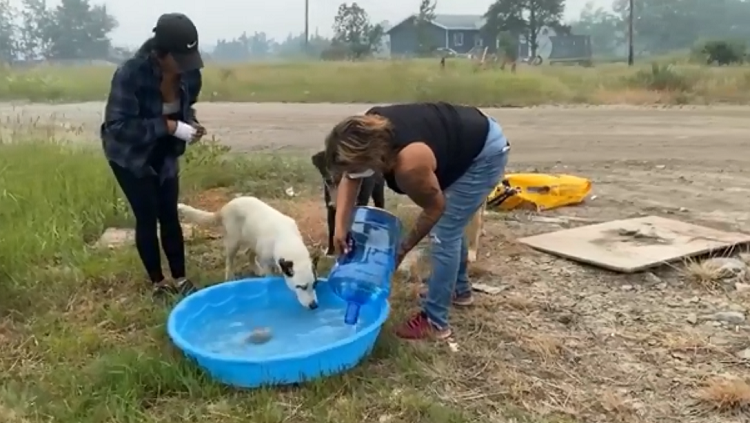 A local group brings hope to people who have been forced to abandon their furry family members in a dangerous situation.

This week, thousands of people have evacuated their homes in Bloodvein First Nation and many other communities due to wildfires. Now displaced, many families are heartbroken and worried not only for their homes but also for their animals. Frontline K9 Community Outreach is one of the organizations dealing with abandoned animals.

“Animals are not left behind. No owner wants to leave their pet behind. It’s heartbreaking, it’s difficult, it’s moving,” said manager Meghan Heuchert. “While we were there, there were buses that kept evacuating people and these buses that evacuating people don’t allow animals on them. If they put an animal on the bus, that’s a problem. person who can’t go. “

“There was a lot of smoke. There were a lot of active fires that we could still see. Luckily it was a lot of rain so that helped a lot, but the winds are turning all day so it’s worrying to see so much smoke and there is still a lot of fire, “said Heuchert, clearing her throat, affected by the smoke she was inhaling.

By filling things like a kiddie pool and four-liter ice cream buckets, teams got to work creating aid stations in the area, trying to “give as much access to food and water. ‘water as possible “.

Heuchert says they don’t know how many animals their efforts will help, but says they brought about 3,500 pounds of food with them and over 100 gallons of water on Wednesday. The director says she is honored to be able to help pets and families.

People text and message the group to tell them about animals that might need help. On the other end of the phone, Heuchert keeps families up to date on the condition of their pets.

“It’s really nice to have that connection and that personal moment where it rewards all the difficult parts that may have happened.”

As more than 130 fires continue to burn across the province, Frontline K9 is preparing to start again this weekend. For those who want to help, Heuchert says one of their big needs is four-liter ice cream buckets. She says people can also work with their sister charity, Feed The Furbabies Canada. They are also looking for temporary host families for pets, as their owners stay at hotels in Brandon and Winnipeg.