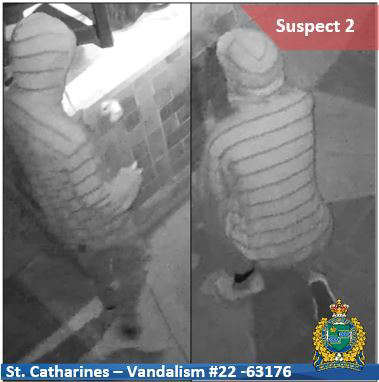 Niagara Regional Police are looking for two suspects wanted in connection with a series of vandalism incidents in St. Catharines.

Collective damages are estimated at more than $5,000.

Suspect #1 is described as a medium build male.

Suspect #2 is described as a thin-built man.

He wore a striped hoodie, pants, light-colored shoes, and a flat-brimmed baseball cap.

The suspects are believed to have traveled on foot or by bicycle.

Residents and nearby businesses are asked to check dashcams, doorbell video cameras or closed circuit security cameras for suspicious activity between June 11, 2022, 9:00 p.m. and 1:00 a.m. on June 12, 2022.