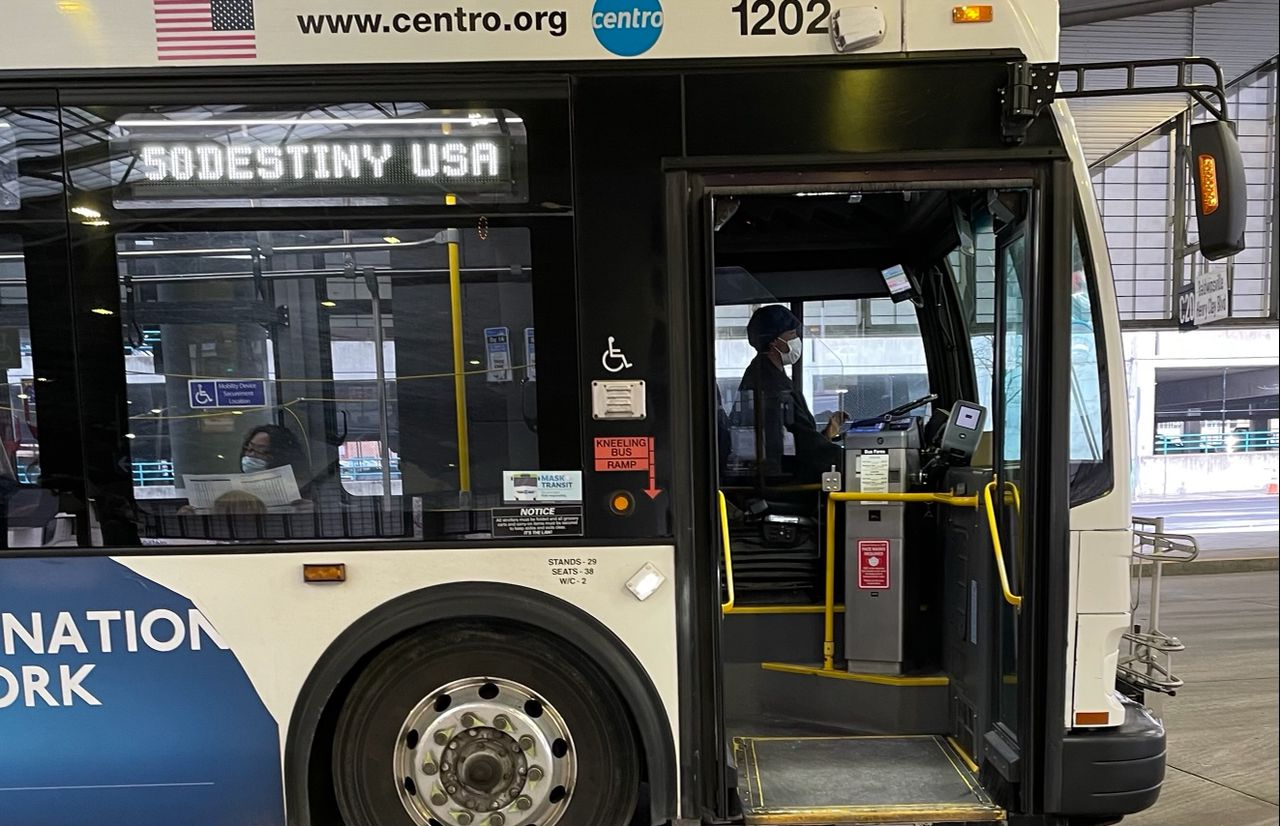 As the sun peeks over the horizon, Harper Badeau walks along Onondaga Road, white cane in hand as hurried commuters rush past him.

Badeau’s workday begins at home with a quarter-mile hike on sidewalks that bulge and crack, challenging his balance and limiting the movement of his cane. His walk ends at Onondaga Road Elementary School where he waits for a Call-A-Bus to take him to his job as a switchboard operator at the Veterans Affairs office.

For Badeau, who is legally blind, and for many other people with disabilities, public transportation is essential.

“I think for blind people in particular, it’s nice to have that sense of freedom that most people can get from being able to drive,” Badeau said.

But Call-A-Bus is far from offering true freedom due to its limited availability. Door-to-door service deviates only three-quarters of a mile from the normal Centro bus route, requiring some riders, like Badeau, to walk to the nearest pick-up location. That makes the service difficult to access for some and impossible for others, Badeau said.

Although below some users’ expectations, Centro offers about 180,000 Call-A-Bus rides per year at a base cost of $3 or less per ride, said Steven Koegel, vice president of communications and Centro business planning.

Over the past year, Centro has seen a 15% decrease in the number of bus drivers according to company executives at the October board meeting. This forced Centro to reduce bus routes and adjust schedules around the city.

In the wake of the pandemic, many Centro drivers decided to retire or transition to working for the state, creating longer and more demanding shifts for the drivers who remained.

Centro recently offered awareness training to Call-A-Bus operators with the aim of creating an inclusive environment for users with disabilities. Each driver was blindfolded and asked to navigate a course by stumbling through stairs and around barriers, taking a moment to experience the perspective of a blind passenger.

Mike Sims drove for Call-A-Bus for 38 years. Through the training, he became aware of the seriousness of the disabilities of some Call-A-Bus users and has since adopted a more empathetic mindset in his work.

“I get fulfillment from helping people, from transporting them,” Sims said. “Otherwise, many of them would have no means of transport; no way to move.

Although Centro equips the buses with amenities such as lifts and ramps to make it easier for vehicles to enter and exit, Sims said he noticed passengers still struggled to get inside buildings. Syracuse without accessible doors. During a routine transport, Sims went out of his way to help an elderly rider with dementia and other physical disabilities enter a senior care facility without automatic entry. He wanted to make sure his passenger got full door-to-door service.

With Syracuse now in the middle of winter, the need for public transportation is increasing for all area residents, Sims said. Weather conditions make walking and driving a challenge in upstate New York.

For residents requiring Call-A-Bus services, the approval process involves forms that must be completed by both the applicant and a licensed professional.

“We fill out the request and I tell people to think about it like, ‘What’s the worst snow day in Syracuse?’ ‘How far can you walk?’ “What prevents you from walking? said Lenore Heffe, Certified Orientation and Mobility Specialist for Aurora CNY. To use Call-A-Bus, a person must prove that their disability prevents them from using the main bus system.

Heffe typically writes up to 12 applications per month. But the Centro approval process to use Call-A-Bus can take anywhere from two weeks to two months, Heffe said.

Long approval times limit the accessibility and availability of transportation services for people with disabilities, many of whom use public transportation to get to and from work. Even though approved, passengers who live in suburban Syracuse still have difficulty accessing Call-A-Bus due to the lack of routes that reach those areas.

“It’s not how many places we serve, it’s how often we serve them,” Koegel said. “So some of the suburban locations may not have weekend service and they may not have night service.”

At Centro’s quarterly meetings, Beata Karpinska-Prehn, an attorney at ARISE Inc., acts as a spokesperson for the disability community. She offers new improvements and makes suggestions on how to improve accommodation for all runners.

“You can’t really send an entire bus, but these individuals still need service,” Karpinska-Prehn said. “So there’s kind of a catch 22 in how you provide this service and it’s always a challenge.”

When public transportation in the city is insufficient, people with disabilities turn to alternative options like Uber and Lyft. Jess Palmer, a 23-year-old college student with spina bifida, uses Uber to avoid taking her electric scooter on major roads to get from place to place.

“They’re expensive, and I think they can be a hit or a miss,” Palmer said of using Uber. On several occasions, when Palmer orders an Uber, the arriving vehicle is inaccessible. Palmer’s electric scooter is built with lots of large, heavy metal parts that Uber drivers struggle to fit into cars, frustrating her.

When she moved to New York for school, Palmer decided to live as close to her university as possible in hopes of avoiding all public transportation, but running errands for essentials still leaves her dependent on other travel options. And using her scooter to cover short distances is a risk she chooses not to take given New York snow and rain threatening to damage the machine. But Uber services and taxis are known for their long wait times.

“Waiting an hour is ridiculous,” Palmer said. “That wouldn’t happen with other people, and I don’t think that’s fair.”

Hydrogen Racer is ready to race Porsches and Lambos, but what’s the point?

How to Set Up Online Registration in 7 Days (or Less)