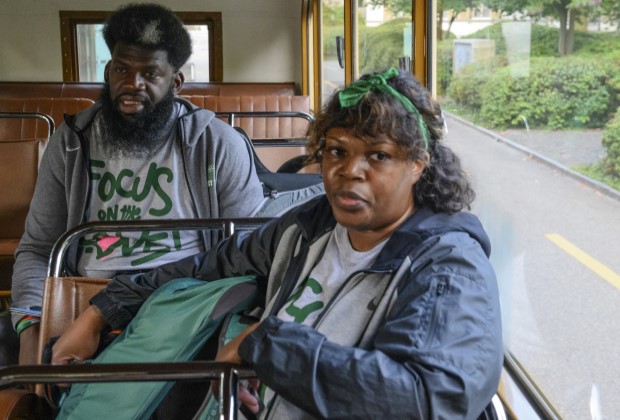 “The Amazing Race” recap: Season 33, episode 4 – Resumption of the race

As we saw in Wednesday’s episode, not only were four teams unavailable to return to the Race post-COVID quarantine, but two teams were added in season!

Nineteen months later, when the teams reunite with Phil in Switzerland, only five of the nine duos are on the mat: Raquel and Cayla, Ryan and Dusty, Akbar and Sheridan, Lulu and Lala, and Kim and Penn. To make up for the lack of runners, Phil says a few familiar faces will take their place. As many of you suspected in the comments for last week’s recap, the Revenants are Natalia and Arun, and Michael and Moe – the first two teams eliminated from the season! (It should be noted that the season was supposed to have nine teams for Episode 4, and even with the additions, that number has dropped to seven. Will there be more non-elimination stages than usual?)

So what was everyone doing during the break? Natalia has been married since the last time we saw her (yes!), while the flight attendants have unfortunately been laid off for a year. And even worse, Lulu and Lala lost their grandmother to COVID, and since it was the height of the pandemic, they couldn’t even be there when she passed away. But now they have a new reason to run, and they’re doing it all for grams.

Phil tells them that some adjustments will be made to ensure their safety. The entire cast will fly on private charters and avoid public transport as much as possible. You know what that means: a lot more autonomous driving! Good for us, but very, very bad for them. (Bring the fights!)

Their first task: find Museum Strasse and board one of the three buses provided. Rides are first come, first served. The Clue: Head to Schwägalp and ride a cable car 8,000 feet above sea level to find the next clue.

The buses all arrive at the same time, so all teams take the tram together. Akbar notes that they’re higher than the clouds, and it’s absolutely stunning – if you’re not afraid of heights, of course.

ROAD BLOCK | In “Who Wants to Take the View,” teams must navigate an arduous hike to retrieve their next clue, which is perched on a vantage point where six countries can be seen at once. (That’s pretty cool.) Each team member is strapped to a professional Swiss navigator who helps them hold onto ropes and walk over tight ledges. Not only does it look scary AF, but the hike also looks difficult, causing Akbar to question his decision to give Sheridan the challenge. And she is in trouble. The altitude hits her hard, and she is afraid of her mind.

ROUTE INFORMATION | Ryan returns first, and the next clue directs them to Gasthaus Sonne. However, they miss the tram by a few seconds and blow up their big lead. When the tram finally returns, all the teams except Sheri and Akbar share the same return trip.

In a huge twist… the cars are all automatic! (Come on, Phil! I sure haven’t seen all the seasons. Race diehards: Is this a first?) Michael and Moe are the first to the Gaushaus where they find the clue to their next…

DEVIATION | In “Punch It”, teams must attach ornaments to a Swiss belt in the correct order to tell a story. Or they can choose “Toss It”, where they’ll perform a traditional flag routine. Kim and Penn, along with Ryan and Dusty go for the flags, as do the twins and Raquel/Cayla. Natalia and Arun, and Michael and Moe, meanwhile, are attacking the belts.

Kim and Penn attempt their first performance, but fail when Penn steps on her flag. Ryan and Dusty, however, run it and pass, making them the first team to rush to the Pit Stop, which this time is located in the town of Altstätten..

At the belt task, Natalia and Arun make their first try, which tells Michael and Moe that they’ve done their belts completely backwards! Luckily for them, Akbar and Sheridan are still fighting their flags, while Natalia and Arun get supremely lost. (Arun is a treasure, and now that we’ve got him back, we need him to STAY.)

STOP AT THE PIT | Ryan and Dusty hit the mat first, winning $2,500 each, followed by Kim and Penn. Raquel and Cayla round out the Top 3, but it’s a foot race, with the twins right behind them. So who came last? Michael and Moe, and unfortunately for them, they are eliminated from the race… again.

Surprised to see the eliminated teams again? Any thoughts on the new security measures? And do you love Arun as much as I do? Tell us all in the comments!

A guide to quitting your job