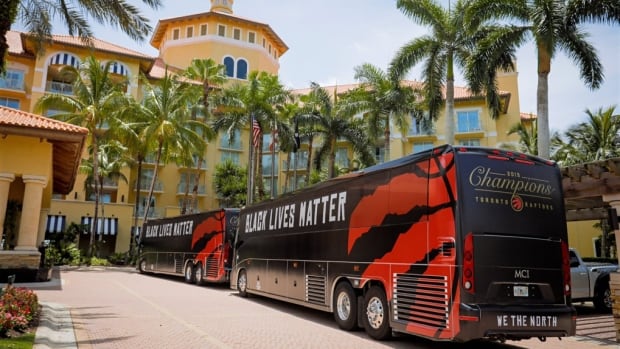 ‘Things must change’: diversity, race and inclusion in sport remain a work in progress


John Wiggins, Vice President, Organizational Culture and Inclusion for the Toronto Raptors, believes there is still a lot of work to be done to tackle diversity, race and inclusion in the sport.

Wiggins was one of many panelists who took part in the discussion on diversity, race and inclusion in the sports industry on Wednesday and believes sport is a platform that can bring about global change.

“I focused on the operations and the basketball team and on winning. This platform and winning took on a new definition of how we are going to win in the community and how we are going. win in society and in the way our team could do it “. Said Wiggins.

“When you talk about the buses, we didn’t just drive to Disney on the buses. We drove two hours through the state of Florida, to I-4 so everyone could see how good we were going to act and saw that Black Lives Matter. … Things must change. Sport is that platform. “

Wiggins was joined by Marco Di Buono of Jumpstart of Canadian Tire, Tanya Phillips of Right to Play, Markina Warner of MLSE Launchpad and Bryant McBride of Burst.

This is the first in a new series of panels on equity, race and inclusion from the Ted Rogers School of Management at Ryerson University. This series is part of the Sport, Diversity and Running project led by Ryerson University Postdoctoral Fellow Dr. Richard Norman.

The monthly series, curated by Dr. Norman, features a range of sports practitioners, including athletes, academics, industry experts and thought leaders reflecting on a variety of topics pertaining to industry and the sport system: what the industry sector has done well needs to happen to move forward and what are the long term implications for the changing sport landscape.

To improve diversity in sport, Di Buono says it starts at the grassroots level and with organizations that need to fund the right programs.

“There are limits to the type of organizations we can fund,” said Di Buono. “If we’re really going to make a difference in this space, we need to start reaching out to the Black and Indigenous led organizations that are doing the grassroots work to engage with children in youth and change the game.

“At the same time, we need to stop funding organizations only and hold them to these ridiculous expectations of reporting and constraints on what they can and can’t do with dollars. The overwhelming majority of organizations want to embrace inclusion, they don’t. I don’t know how, ”he continued. “They don’t have the capacity, they don’t have the capacity.”

IOC Rule 50 is a concern

One of the main concerns of the panelists was IOC Rule 50, which prohibits athlete events at the Olympics. Warner believes that if the athletes hadn’t protested at the previous Games, the world and sport would be totally different.

“This world would actually be a different place and a lot of us would be different people if John Carlos and Tommy Smith hadn’t done what they did and we all got to see it,” she said. declared. “This, to me, is just another example of the deep roots of racism and oppression in sport.”

Phillips, meanwhile, is hopeful athletes continue to protest, as seeing competitors in the world’s biggest sporting event through the lens of equality will create change.

“Didn’t they pay attention to what happened in the world? We all talk about sport as being the great unifier and if the IOC could turn against the fact that it is not a protest but a unifying way to change the world, the IOC could be the leader. in this area by celebrating how the world came together a year ago, ”said Phillips.“ That’s what I grew up in. thinking of the Olympics. “

Wiggins also knows that the time to stick with sport is over and that pushing for change is essential.

“For the IOC, you clearly don’t understand. But you will.”