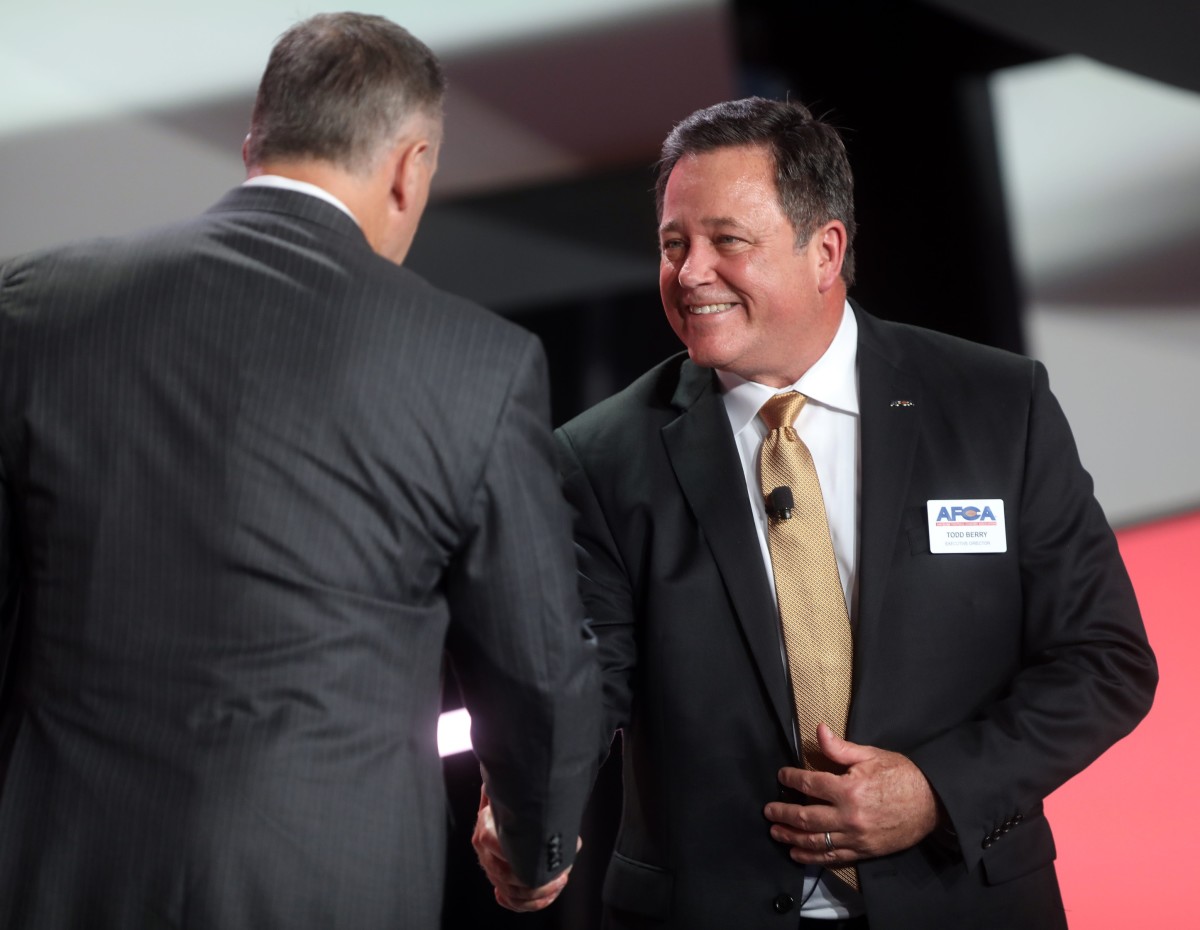 Todd Berry will step down as executive director of the AFCA in January 2024, Berry confirmed to FootballScoop on Tuesday. Ross Deller from Sports Illustrated reported the news for the first time.

Berry has led the AFCA since 2016. He replaced College Football Hall of Fame coach Grant Teaff, who led the organization from 1993 to 2016.

He worked at 12 institutions, as a head coach at Illinois State from 1996-1999, the Army from 2000-2003, and then ULM from 2010-15. Illinois State in 1999 won the Missouri Valley Football Conference and reached the Division I-AA semifinals, and in 2012 he presided over the best season in ULM history, going 8 -5 with an overtime win at No. 8 Arkansas and an Independence Bowl appearance.

Berry joined the AFCA in 1984 and came into the leadership of the organization in 2001, when he joined the board of directors. He was the AFCA’s first vice-president when he became the organization’s fifth executive director in 2016.

Berry briefed the board in May and spent the spring and summer briefing coaches. He will serve through the 2022 and 23 seasons before handing the proverbial football over to his successor at the 2024 AFCA convention in January. As part of his role with the AFCA, Berry sits on numerous committees inside and outside of the NCAA.

In the leaderless structure of college football, the AFCA’s next executive director must work to build consensus among the game’s various factions as it rapidly moves into a new era. The next AFCA chief will have to navigate the rewrite of the NCAA constitution as this organization actively abdicates its authority to write and enforce the rules that govern the game, the push continues to write and implement federal legislation to name, image and likeness, plus a new College Football Playoff format set to begin in 2026.

“Somebody will have to be actively engaged with the NCAA and possibly with the other entities, where everyone is aware,” Berry told FootballScoop. “The AFCA needs to have a say. I think some of the problems we have right now, quite honestly, because you have people outside of the industry making decisions. I don’t think we as coaches, need to have free rein on college football. We are here to help athletes and universities. Athletic directors, college presidents, commissioners and the AFCA should all sit down together and make decisions that are good for the game.

Asked to list his biggest accomplishments in six seasons on the job, Berry listed navigating through the 2020 COVID season — Berry survived a serious bout with COVID-19 this spring — and going from redshirt rule to 4 games. This rule, Berry explained, grew out of personal experience dating back more than two decades.

As his 1999 Illinois State team progressed through the Division I-AA playoffs, the Berry Redbirds lacked able-bodied defensive linemen. Berry approached redshirt freshman Jeff Weese to play in the upcoming semifinal against Georgia Southern. “He was a talented player. His senior year, had he been able to take a year off, would have been meaningful,” Berry said. “He was that kind of player.”

Weese played in that game, sacrificing a year of his eligibility for 20 snaps in a game his team ended up losing. “I just thought, ‘That’s the most unfair thing to ask a player to do,'” Berry said. “I took a lap of honor around my coffee table when this rule passed.”

Berry plans to take time to enjoy some much-needed time off and cross things off his to-do list once he officially retires in 18 months, but he hasn’t ruled out a return to work. training at a lower level on the road.

“I love the game for what it teaches and what it stands for,” he said. “Winston Churchill said courage is the greatest of all virtues because unless a man has that virtue he has no security to preserve another. I learned that from football Whenever I didn’t think I could take another step, I’m sure you learn that the only limits are those that you have preconceived in your mind. I learned that from football.