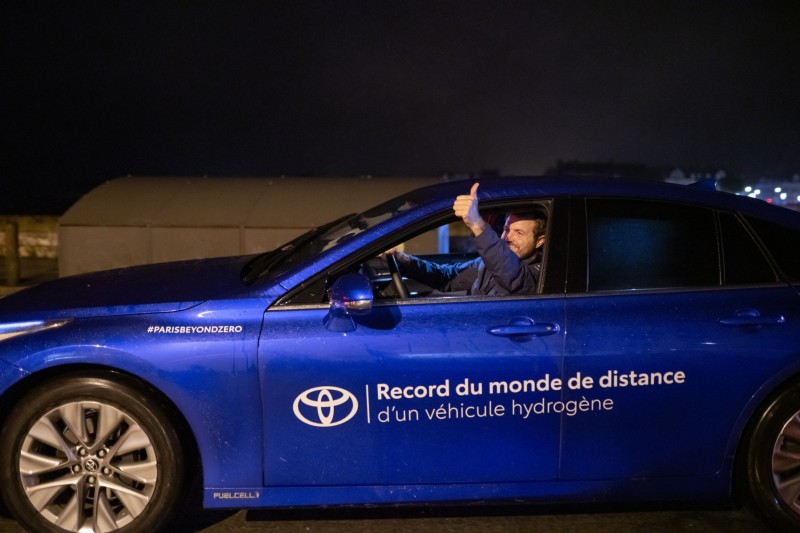 
The trip began on Wednesday May 26 at 5:43 am from the HYSETCO hydrogen station in Orly and ended after 1003 km covered in a single refueling.

The 1003 zero-emission kilometers were traveled on public roads, south of Paris and in the Loir-et-Cher and Indre-et-Loire regions, and the distance and consumption have been certified by an independent authority. .

Green hydrogen was used in the record attempt and the average fuel consumption was 0.55 kg / 100 km, with Mirai being able to store 5.6 kg of hydrogen.

The new Mirai has demonstrated its efficiency and ease of driving

In addition, the increased efficiency of the fuel cell system, along with a higher hydrogen storage capacity and better aerodynamics, contribute to an increase in range to around 650 km under normal driving conditions, with less than 5 minutes of refueling time at 700 refueling bars. station.

To achieve this record driving distance of 1003 km, drivers adopted an “eco-driving” style but not specific techniques that could not be used by everyday drivers.

The Toyota Mirai and hydrogen at the heart of Beyond Zero

Beyond Zero emphasizes that zero emissions is not Toyota’s destination.

It is simply a step in Toyota’s electrification journey to overcome obstacles and build a better future for all: Beyond Emissions, Beyond Restrictions, Beyond Expectations and Beyond. barriers.

Mirai clearly demonstrates the “beyond emissions” aspect by highlighting the benefits of zero-emission electric mobility while providing safety, comfort, extended range and ease of recharging.

In addition, hydrogen, as a credible and abundant resource for transporting and storing energy, represents a strong opportunity to create a better society.

Hydrogen can provide zero-emission mobility, not only for road transport, but also for trains, ships and planes, and to generate energy for industries, businesses and households.

The 4 pilots who completed the record attempt included Victorien Erussard, the founder and captain of Energy Observer.

Energy Observer, of which Toyota is a partner, is the first boat equipped with a Toyota fuel cell, is energy autonomous, zero emissions and is presented as a communication tool and a research laboratory towards the energy transition. Energy Observer is today an exploration and innovation company. It recently presented its brand new exhibition village dedicated to renewable energies and hydrogen in Paris.

During this event, the Eifel tower was illuminated for the first time with green hydrogen, thanks to the GEH2® hydrogen generator developed by the start-up EODev, in which Toyota is a shareholder.

“It’s an incredible challenge that we have taken on with the new Mirai. Internally, it is the state of mind of Start your Impossible, to exceed our own limits, that drives us, and we have proven it again today. I would like to thank the teams from Toyota France and Toyota Europe, as well as Victorien d’Energy Observer, with whom we share the same vision and the same ambition. It is through solid partnerships that we can contribute to a better and more environmentally friendly society. With Toyota’s ambition to go beyond zero in mind: take a seat for the future. “

“I am very happy to have taken on this challenge of 1000 km beyond the wheel of the new Mirai. Toyota has always been at the forefront of innovation in the field of hydrogen and our collaboration grows stronger year after year. As a former offshore racer, I need to take up challenges and I warmly thank Frank Marotte and his teams for taking me on this zero-emission adventure, showing that nothing is impossible and that hydrogen mobility is here today!