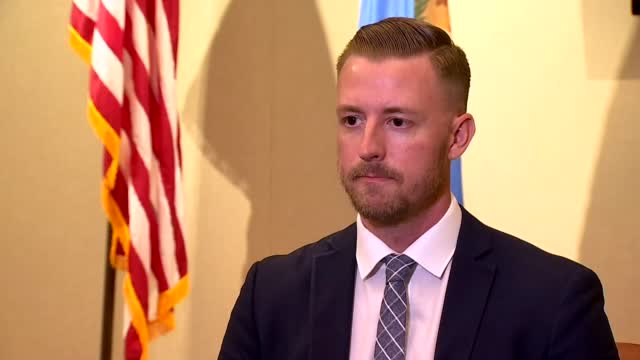 Walters demands that schools do more to stay open; Hofmeister describes him as “out of touch”

A tweet from Gov. Kevin Stitt’s Education Secretary turned into a statewide debate about how our schools are grappling with the latest wave of COVID-19.

Education Secretary Ryan Walters insists schools should do more to stay open. State Superintendent Joy Hofmeister said the schools had done all they could and blamed the rash of disruption on the governor.

“It is imperative to send a message to principals to exhaust all available resources to keep our schools open,” Walters told News 9.

Walters sparked outrage from some educators with a tweet saying children suffer when administrators act out of fear and not in the best interests of the students.

When asked if he regrets his tweet which insulted some educators, Walters said, “I make no apologies for standing up for students. I will always do what I think is in the best interests of our children. I want our school to stay open.

“It was a kick in the teeth for those who serve in schools and further proof that the governor’s office leadership is effective and out of touch with issues affecting families in Oklahoma,” said Hofmeister.

Both are running for senior elected positions. Hofmeister changed political parties, running for governor as a Democrat. Walters is in the running for Hofmeister’s current role of state superintendent.

“School districts need to take advantage of federal dollars and make sure they pay substitutes at a high rate; they must reach out to parents to replace them. They need to reach out to the community, reach out to the churches and tell them to come and help us keep the schools open, ”Walter said.

“Each of our school districts is already paying more for substitute teachers. They are already working to find volunteers, many (administrators) replace the teachers, the cafeteria, those who drive the buses when people are sick, ”said Hofmeister.

Hofmeister held a call with statewide superintendents on Wednesday afternoon. She said the spread of school closures depended on the trajectory of the virus.

“Right now, COVID is raging across the state, and we don’t have the people, the volunteers for substitute teachers to run the schools,” she said.

“The approach has to be ‘what option has not yet been explored to keep our children in school?’ Said Walters.

Walters, a history teacher, said he was freeing up his schedule to start substitute teaching later this week.

The Hofmeister team said they would help out at Western Heights Public School on Friday.